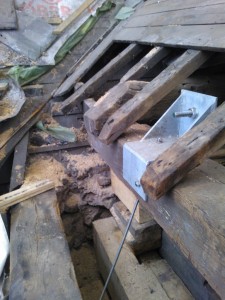 The securing of the Cuerdley Chapel roof has reached an important milestone!

After many months of design by FPL and careful work on site, the medieval timbers and overall stability of the Chapel roof have now been secured.  With the condition of the roof and stability of the supporting stone walls having been in jeopardy for many years, the new structural ties have now been put in place by the Contractor Mather & Ellis.  The final component to complete the stabilisation, a new portal to support the failed medieval gable truss, is due to be installed shortly.

Prior to the introduction of the new structural supports, extensive timber repairs against years of decay and beetle attack were undertaken.  The works also involved the installation of huge replacement oak beams adjacent to the South Aisle arch.

With much relief on the behalf of the PCC, FPL and the team are looking forward to reinstatement of the slate roof covering to the Chapel and Organ Chamber before preparing for a further phase of work involving the re-roofing of the South Aisle.

This website uses cookies to improve your experience while you navigate through the website. Out of these, the cookies that are categorized as necessary are stored on your browser as they are essential for the working of basic functionalities of the website. We also use third-party cookies that help us analyze and understand how you use this website. These cookies will be stored in your browser only with your consent. You also have the option to opt-out of these cookies. But opting out of some of these cookies may affect your browsing experience.
Necessary Always Enabled
Necessary cookies are absolutely essential for the website to function properly. This category only includes cookies that ensures basic functionalities and security features of the website. These cookies do not store any personal information.
Non-necessary
Any cookies that may not be particularly necessary for the website to function and is used specifically to collect user personal data via analytics, ads, other embedded contents are termed as non-necessary cookies. It is mandatory to procure user consent prior to running these cookies on your website.
SAVE & ACCEPT
Finlason Partnership Ltd